I love this sculpture so much, I'm probably going to start going out of my way to look at it. You know, compared to the stereotypes of the adjoining Meeting Place sculpture, the wind lifting this rather individually shapen poet's coat and nearly blowing his hat away while he gazes up in wonder are what actually captures the romance of travel. My spirits lift just looking at him. He also has every right to a nice sculpture in St Pancras station:


Betjeman was one of the most energetic figures who, in the 1960s, fought the destruction of St Pancras - mercifully unthinkable today, now that public taste has softened towards George Gilbert Scott's marvellously elaborate neo-Gothic station buildings and old Midland Grand Hotel. "He didn't save it singlehandedly, but it certainly wouldn't have happened without him," said Andrew Motion, one of Betjeman's successors as poet laureate.


Somehow, though, I'd missed out on his efforts a poet until now. Now I've discovered him, I find he has that mix of spirituality and prosaic-ness that's typically British. When I learned he liked the ghost stories of M. R. James, I looked to see if he'd written any ghost poems and discovered A Shropshire Lad, about the homecoming of the ghost of Captain Webb, swimmer of the English Channel, who died while attempting to swim through the rapids under Niagara Falls. It even works quite well as a folk song:

Posted by Anfenwick at 09:09 No comments:

The Meeting Place at St Pancras by Paul Day 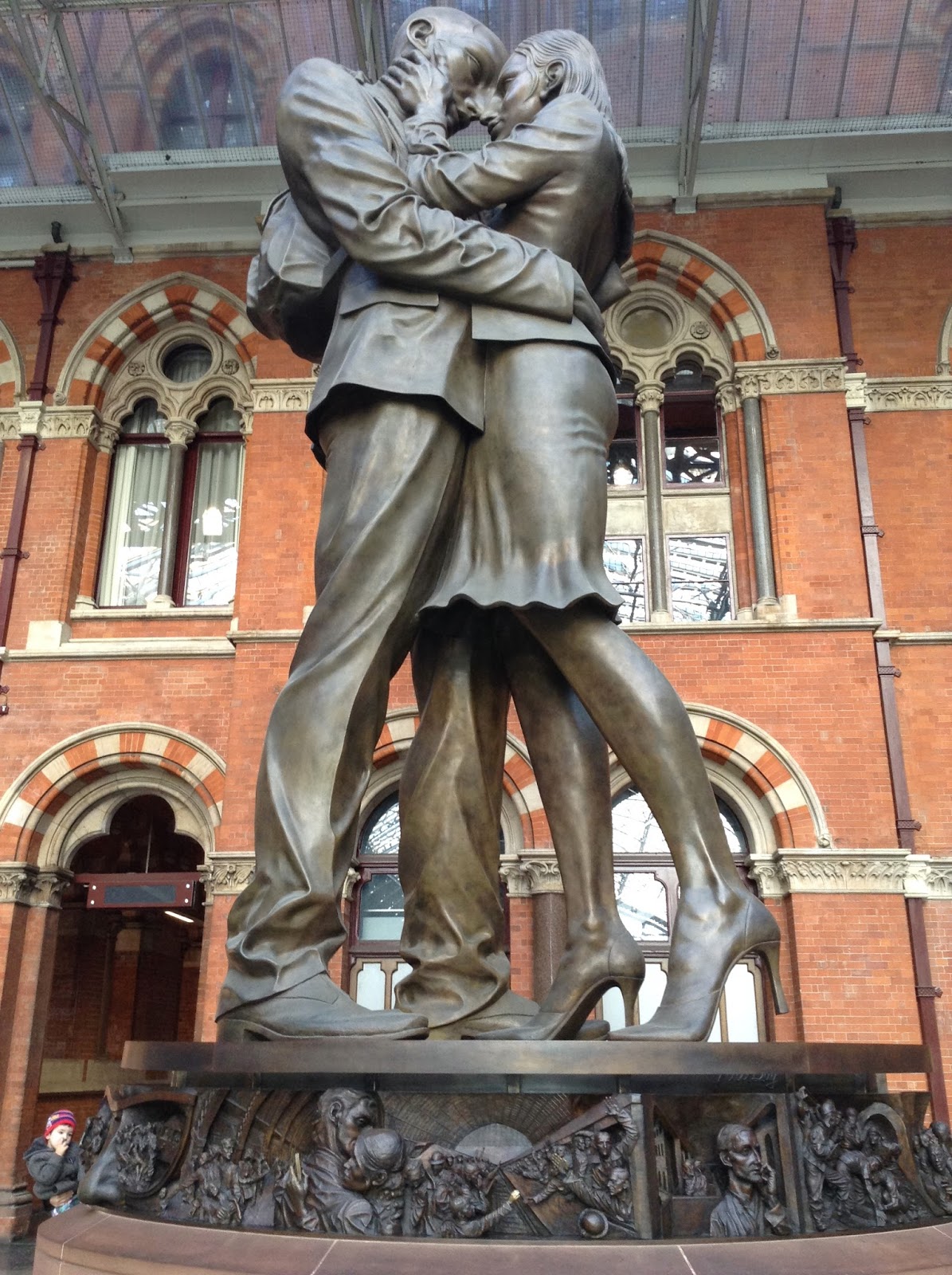 Wow! The Meeting Place is certainly quite a monumental and instantly impressive piece of work. Apparently, its been quite a controversial piece (which one hasn't). I feel reasonably positive about it, although I don't think it had quite the effect on me that the artist intended. In this interview, given when the sculpture was unveiled, he says:


One (idea) was the embracing couple under a clock at a railway station; something that can be universally recognised as a symbol of travel is the couple being reunited. The clock becomes a moon at night. There is a sense of reunification. That had the romantic element.


The figures themselves, I wanted them to be outside of race and outside of time.

I'm not sure I can convince myself the figures are outside of race, but never mind. They're certainly not outside of time - fashion being what it is, that's just impossible. Imagine them in Edwardian costume and you'll see what I mean. And how many women dress like that now? These two are definitely of the 20th century and something about them - maybe it's the plinth - makes me think more of separation than reunification. They seem so closely associated with all those iconic images of soldiers going off to war. Will he ever return? At the moment of the kiss, there is hope of course, but also fear.

That's why the sculpture initially struck me as more serious than the artist perhaps intended. After I read Day's interview, the male and female figures had a tendency to remind me of the stereotypical Him & Her you get on the top of wedding cakes or on musical boxes. I can understand people not being happy with something that big and that chintzy, whereas a memorial to the impact of politics and warfare on romance... I still like it okay, but I prefer my version and really, I like the plinth best of all.
Posted by Anfenwick at 01:32 No comments:

By some miracle, I'm ahead of schedule with NaNoWriMo, even though it is the worstest, paltriest, most ludicrous writing I've ever done in my life. I rewarded myself by going on  mini exploration in London, specifically of St Pancras Railway Station, which until now I knew only through its description in Douglas Adams' The Long Dark Teatime of the Soul:


On the west side of St Pancras Street, just a few yards north of the Euston Road, a flight of steps leads up to the forecourt of the old Midland Grand Hotel, the huge, dark gothic fantasy of a building which stands, empty and desolate, across the front of St Pancras railway station.
Over the top of the steps, picked out in gold letters on wrought-iron-work, stands the name of the station. Taking his time, Dirk followed the last of the band of old tramps and derelicts up these steps, which emerged just to the side of a small, squat, brick building which was used as a car park. To the right, the great dark hulk of the old hotel spread off into the night, its roofline a vast assortment of wild turrets, gnarled spires and pinnacles which seemed to prod at and goad the night sky.
High in the dim darkness, silent stone figures stood guard behind long shields, grouped around pilasters behind wrought-iron railings. Carved dragons crouched gaping at the sky as Dirk Gently, in his flapping leather coat, approached the great iron portals which led to the hotel, and to the great vaulted train shed of St Pancras station. Stone figures of winged dogs crouched down from the top of the pillars. 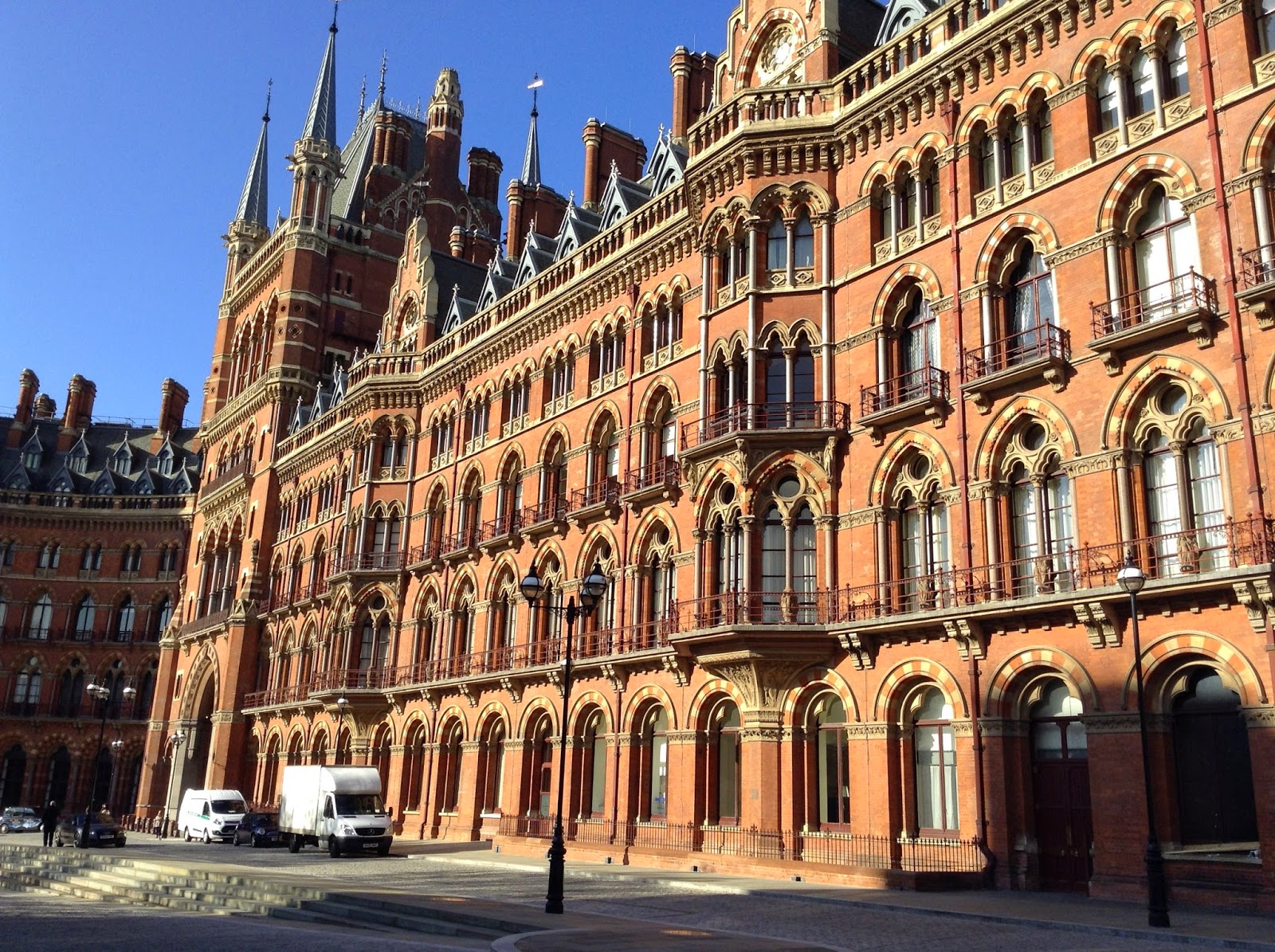 Here, in the bridged area between the hotel entrance and the station booking hall, was a large unmarked grey Mercedes van. A quick glance at the front of it was enough to tell Dirk that it was the same one which had nearly forced him off the road several hours earlier in the Cotswolds.

Dirk walked into the booking hall, a large space with great panelled walls long which were spaced fat marble columns in the form of torch holders.
At this time of night, the ticket office was closed - trains do not run all night from St Pancras - and beyond it the vast chamber of the station itself, the great Victorian train shed, was shrouded in darkness and shadow.
Dirk stood quietly secluded in the entrance to the booking hall and watched as the old tramps and bag ladies, who had entered the station by the main entrance from the forecourt mingled together in the dimness. There were now many more than two dozen of them, perhaps as many as a hundred, and there seemed to be about them and air of repressed excitement and tension. 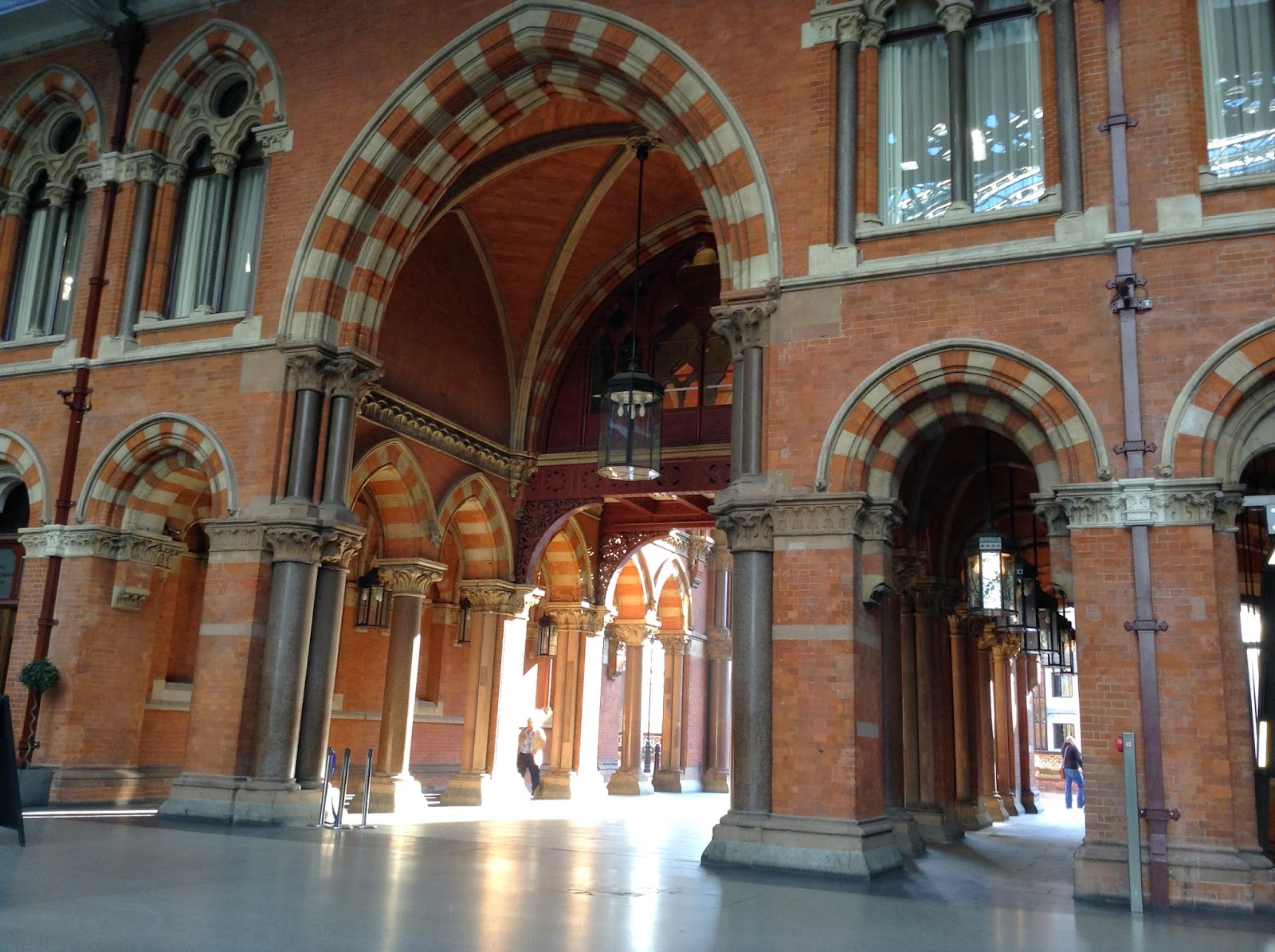 And one by one they disappear, until finally Dirk Gently is left all alone in the middle of the great, dark, empty railway station.


A gust of wind blew through the huge vaults of the empty station and nearly provoked in Dirk a great howl of frustration at the trail that had so suddenly gone cold on him. The cold moonlight draped itself through the long ranges of glass panels that extended the length of St Pancras station roof.
It fell on empty rails, and illuminaed them. It fell on the train departures board, it fell on the sign which explained that today was a Blue Saver Day and illuminated them both.
Framed in the archway formed by the far end of the vaulted roof were the fantastical forms of five great gasometers, the supporting superstructures of which seemed in their adumbrations to be tangled impossibly with each other, like the hoops of an illusionists conjuring trick. The moonlight illuminated these as well, but Dirk it did not illuminate.


It's still sort of like that except that in the sunlight it's all glowing amber brick and sparkling crystal roof, beautifully renovated and serenely focused rather than hectic (for a station before lunchtime, and one that is now host to the fastest train out of Britain). The booking hall has become a bar of the same name, there is a chic shopping arcade in the lower concourse and a couple of nice sculptures. I would love to stay in what's now known as the Renaissance Hotel, just so I can see what it's like inside. Which is kind of a crazy thing to want to do when you live in London already.
Posted by Anfenwick at 09:35 No comments: