I needed some spiritual renewal this Sunday, having possibly spent a bit too much of Saturday 'disbelieving in' Bacchus. Today will therefore be spent with the equally non-existent Apollo. In accordance, with long-standing religious tradition, let's begin with an injunction to avoid having too much fun. Apollo is the god of music, so here's Plato coming across like an evangelical Christian:


"Our music was once divided into its proper forms... There were no whistles, unmusical mob-noises, or clapping for applause. The rule was to listen silently and learn; boys, teachers, and the crowd were kept in order by threat of the stick... Later, an unmusical anarchy was led by poets who had natural talent... Through foolishness they deceived themselves into thinking that there was no right or wrong way in music, that it was to be judged good or bad by the pleasure it gave"

I immediately broke this rule by enjoying the First and Second Delphic Hymns to Apollo but your mileage may vary. These hymns are reconstituted from fragments of ancient Greek notation dated to 128 BCE, though I do suspect they're arranged to suit modern ears. If you hate them, well done, Plato would approve!

When I was young and single enough to have a favorite poet, and that poet was W.H.Auden, I happily bought into his denunciation of Apollo in the poem entitled Under Which Lyre. True, he favored Hermes instead:


"The sons of Hermes love to play,
And only do their best when they
Are told they oughtn't;
Apollo's children never shrink
From boring jobs but have to think
Their work important."

It sounds like J.K.Rowling was inspired by this passage when she was creating the Hogwarts houses and in retrospect, those 20th century Oxford/Cambridge types like Auden probably did spend far too much time disbelieving in Greek gods. The interesting aspect of their habit is that it played quite a role in gay history - or at least the gay history of the upper classes - by exposing educated young men to a society where homosexuality had an acceptable form. But the important thing for me here is that Auden gives some really good tips on how not to believe in Apollo.

Thou shalt not answer questionnaires
Or quizzes upon World-Affairs,
Nor with compliance
Take any test. Thou shalt not sit
With statisticians nor commit
A social science.

Thou shalt not be on friendly terms
With guys in advertising firms,
Nor speak with such
As read the Bible for its prose,
Nor, above all, make love to those
Who wash too much.

Thou shalt not live within thy means
Nor on plain water and raw greens.
If thou must choose
Between the chances, choose the odd;
Read the New Yorker, trust in God;
And take short views."


I only agree with about half of all that. In many ways, I suspect Auden was misled on the subject of Apollo who was often quite disorderly and chaotic, bringing plagues and healing alternately, prophesying in mind-altering-substance-induced riddles, threatening not to make the sun rise at the drop of a hat, and trying to sleep with large numbers of humans and supernaturals of any sex whether they wanted him or not.

Since I disbelieve in him I won't have to take sides, which is good because bad things tended to happen to people on the opposite side of Apollo in competitions. Midas disliked his music and got donkey ears for his pains (maybe I should have mentioned that earlier) and Marsyas was flayed alive for losing a music competition against him. In other words, Apollo was a Bad Boy and worse than that, he was cute by definition.

Posted by Anfenwick at 10:19 No comments:

Email ThisBlogThis!Share to TwitterShare to FacebookShare to Pinterest
Labels: music

Birthday cake with camels - because why not? 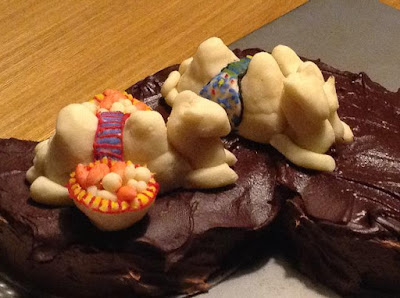 So, I was requested to make a birthday cake with camels.... because camels are in, obviously, and anyone who didn't know that is out, equally obviously.

DAY 2 AM: decided to use new chocolate cake recipe off the internet. WARNING!!! Do not use this recipe. It has ten times too much sugar, probably as the result of a typo. I was tired and didn't notice, especially as it repeats the error lower down. Ended up with chocolate marshmallow fluff. PM: started again using tried and tested Delia Smith recipe with chocolate buttercream filling instead of prunes. Inserted cake dowels with hovering camels on top. Collapsed into bed.

This was not my fanciest cake ever. This one was much more elaborate in appearance, but didn't taste as good. 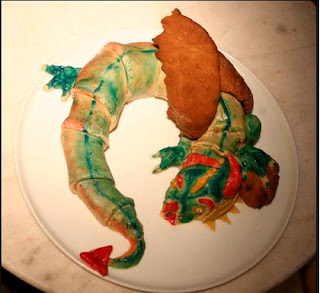 Posted by Anfenwick at 07:06 No comments:

This is what we were watching while we were sick. Beautiful animations, music and stories.

Song of the Sea

My only complaint: it made us cry a lot. Also SPOILER WARNING AHEAD---- If you're half selkie and half human and you're forced to choose to give up one of your halves at the ripe old age of six, that doesn't actually make you all human or all selkie, does it? It just means you've been horrifically amputated of half your being. So that's not very sweet and endearing and romantic.

The Secret of Kells


This is about the making of the Book of Kells. To my astonishment, there seem to some people around who have not heard of this book. We were interested in how the drawing developed between the Secret of Kells and Song of the Sea.
Posted by Anfenwick at 05:35 No comments: 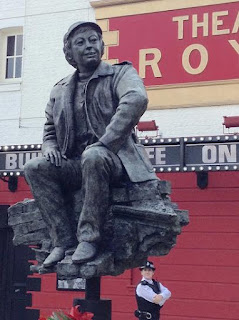 The Joan Littlewood sculpture by Philip Jackson just unveiled outside the Theatre Royal Stratford East on Sunday. A few quid well spent, I think.... from my point of view anyway, I think other people might have contributed more than a few quid.

I love the sculpture. Also I love the quote on the front of theatre (you can only see some of it):


"I built my life on the rock of change"

We had a beautiful autumnal day for the unveiling, then had to skip some of the festivities in order to carry out quality control on pizza and beer at The Crate, and to inspect the proper functioning of the locks along the canal. We came back for Joan's Jamboree in the evening and had a blast. Best Sunday for a while!!!
Posted by Anfenwick at 00:58 No comments:


What I went to see on a whim this Friday night.


Hofesh Shechter presents deGeneration, an inspiring opportunity to see the youngest dancers of Hofesh Shechter Company at the start of very promising careers, take on Shechter’s world and perform it with the ferocious physicality and intimate sensitivity for which his Company is internationally renowned.

It was very good of course. Strangely enough (if you know me) I just started dance classes - a kind of modern, creative dance. I've been to all of two of them, and they've already changed my perception of dance. Before, the dancers always seemed like a manifestation of the music. I never really thought about what they were doing. Now I'm sitting there thinking 'God, that looks hard'. And also, 'Why are our dance classes full of all this sweetness and light stuff? I want to do darker emotions, like this.'
Posted by Anfenwick at 00:48 No comments:

Wow, that was intense! I don't quite know what to say about Slap that wouldn't count as a spoiler. Well, maybe just one thing. When I read the blurb,


...Dominique, a glamorous transsexual hooker in the throes of an emotional meltdown, caught between a rock and hard face, juggling a stalker client with a crush and her cute, chavved out, drugged up boyf who hasn’t got out the bath in a week...

I thought, having known the occasional bloke who hasn't got into the bath for a week, that it could have been worse.

Wow. Lot's of fun though.
Posted by Anfenwick at 14:51 No comments: