In which Pastor Ezeugwu slanders an angel, though this is the least of his sins

This story should start in the proper place, with a rather beautiful artwork by Chinese artists Sun Yuan and Peng Yu. It's a fibreglass angel fallen to the ground, shown at the Saatchi Gallery in London in 2009, though there have been other versions in other places: 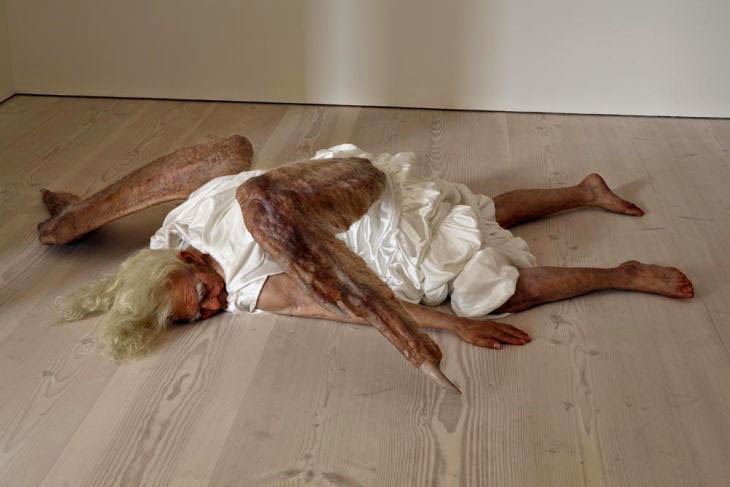 Not very Nigerian looking, not very female looking and not very witchy, I think you'll agree. Pastor I.C. Ezeugwu, has a whole different angle on the thing, quite literally. 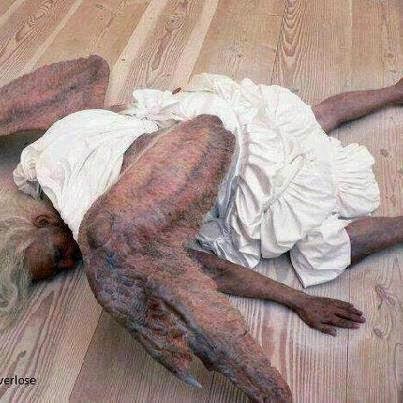 Frame it so the face is hidden, darken the skin a bit, and write a little story underneath it, and lo and behold, you have a dead Nigerian witch on your hands. Pastor Ezeugwu provides the little story (emphases mine):

On the eve of the crusade, I had a revelation where three elderly women came to me and told me to cancel the crusade. On the morning of the crusade, I held a brief counselling session. An elderly woman who came for counselling on a white robe told me that "her members don't want me to hold the crusade". That was what her interpreter told me as she couldn’t speak English. I asked why? She said because they rule the land. I told her interpreter to tell her that they don't rule the land, JESUS rules the land. She said they'll kill me and I told her I'll kill them first hence the crusade was titled "Operation Kill the Witches". The crusade was meant to hold for 4 days but later lasted for 7 days as a result of the testimonies the people were sharing.

Eight days after I went back to my base, I received a telegram from the leader of the organising committee informing me that the head of the witches was dead after suffering a partial stroke for 2 days.

Note the little details, the white robe and the allusion to the death of the 'head witch' intended to help the inattentive link the story with the picture without going quite so far as to assert they are one and the same. I won't tell you to note the fact that this believer in Jesus is going around threatening elderly ladies with murder, I'll trust you to notice that for yourselves.

This debunking of this piece of maliciousness was brought to us by Richard Bartholomew who apparently heard about the whole thing from Leo Igwe, and passed it on to Ophelia Benson, from whom it reached me. It's a pretty pathetic and dangerous scam. I mean come on, if you want to believe in witches, believe in this, by the same artists: 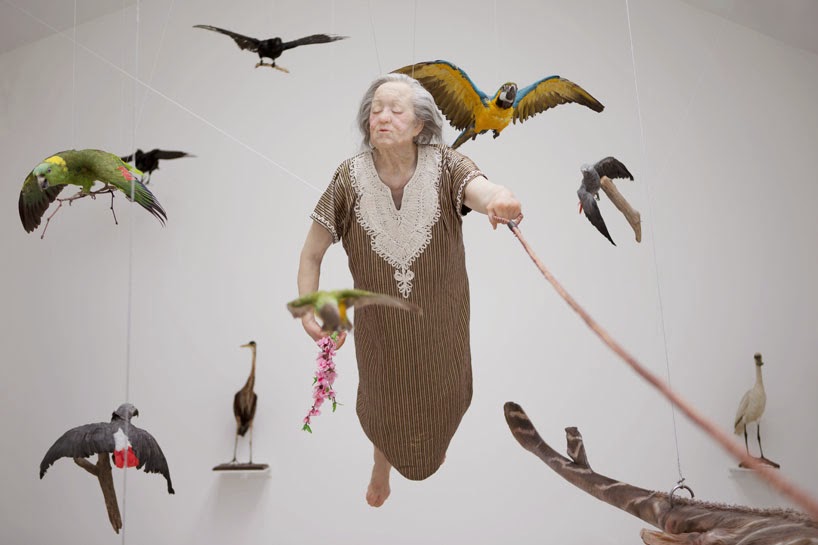 That is an amazing piece of art I would have loved to have seen. And this is only a tiny part of it. It's called Dear and was shown at the Galerie Perrotin in Paris.

Other stories about malicious fabrication of supernatural incidents: