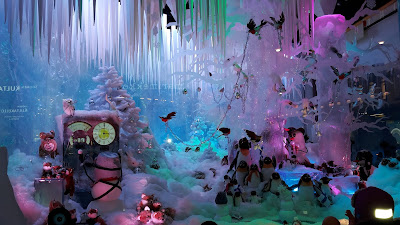 This is where we are - Lala Land, Helsinki. We like Helsinki: it's cold, the food is good, the hotel is great and there was a Crocs shop. Now we have to go, so I'll explain about how we didn't really escape the Brexiters in a bit.

So the barman in the hotel in Helsinki is from a little village in Kent, but he's been living in Finland for 9 years. He turned out to be a perfect example of the obliviousness people can display to the way their lives are shaped and supported by institutional underpinnings.

Our barman is a Brexit supporter. We found this out because we started off commiserating with him on the grounds that he was surely going to have to start Finnish residence or citizenship proceedings. He said he wasn't going to do that and doubted he could pass the language test anyway. Well yeah, Finnish has a reputation! So we asked him if he was going back to Kent and he said, oh, no, he was staying right where he was. It's not like they were going to kick anyone out of Finland, really they weren't.

Huh? They might not send the deportation van round on the day Britain formally leaves the EU. They don't need to. Let's just start with what we all know: this man has an employment contract that depends on him being an EU citizen. If nobody does anything, his employment contract will become.... 'non-legal' the day Britain leaves the EU. Perhaps his boss, who knows him, will not want to fire him. Perhaps the Finnish government, despite no doubt having better things to do, will pass a law saying that existing contracts with British citizens are valid. What then? Not many people stay in the same job for ever these days: those contracts might be good right up until the moment he wants to change jobs or gets fired. Or promoted, even. At that point, without some sort of Finnish immigration proceedings, there is no reason to suppose he will be able to enter into a new contract. There would be nothing to distinguish him from someone who arrived from Britain a few days ago, and the whole point of Britain leaving the EU is to curtail the freedom of movement of people. The movement of Eastern Europeans to Britain principally, but by the inevitable law of reciprocity, people like him. If Finland wants Britons like him, they will have to create a whole new administrative underpinning form them, or assimilate them into the immigration systems they already use for non-EU citizens.

What would happen otherwise, they day he decides to go and visit his dear old mother in Kent? When he tries to return 'home' to Finland, he will have to go through immigration as an 'Outsider'. 'How long are you staying?' 'Oh, I live and work here,' will not be an acceptable way for that conversation with border control to go. Without a work permit, there will be nothing to distinguish him, a person who exercised bona fide treaty rights, from a Briton who has no expectation of entitlement to live and work in Finland.

Even worse, all over Europe, all those databases which are programmed to treat the nationality code 'GB' as 'One Of Us' will flip over to 'Treat As Outsider'. Without some form of immigration proceeding, this can affect Britons in Europe in every part of their administrative lives: health, social security, education, legal rights, and in a way that is often completely automated and gives them no recourse through interaction with a human being.

It is true that few politicians, in Britain or the rest of the EU, want this outcome. It is also true that they are going to have to do time-consuming political and institutional work to save the rights of a greater or lesser number of people, depending on the state. Britain has proposed sorting out the issue of Europeans in Britain and Britons in Europe early in its departure negotiations. It is easy for Britain to propose this, because immigration to Britain falls within their jurisdiction. In the past, the EU has not had much to do with immigration policy of non-EU citizens in the member states. It is not clear to me that they have any standing to negotiate on this topic. It might be up to each member state individually to decide what provisions they want to make for Britons. We don't know yet.

Whether the EU decides collectively or the member states decide individually, it's almost certain that the most Britons in Europe (or Europeans in Britain) can expect is form of accelerated, and possibly easier than usual immigration procedure. Whether they will waive their usual language or culture test, their fees, or any of their administrative red tape is a moot point. Most of us are not counting on it. It seems quite possible to suppose that they will take the opportunity to repatriate anyone who has a criminal record, looks insolvent, or has failed to learn the local language after nine years. We consider that so likely that as we parted we automatically wished our barman luck in getting to grips with Finnish at last.
Posted by Anfenwick at 00:45