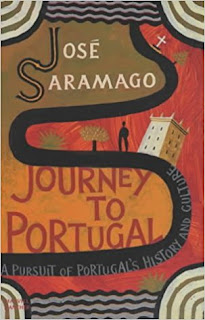 In 1981, Portuguese author José Saramago published Journey to Portugal, a thorough exploration of his home country. Nowhere does he display more faux bewilderment than at its borders, with their history of incomprehensible skirmishes, their land owners who answer to both Portuguese and Spanish administrations, their workers to whom the border represented a living and those others to whom it represented an obstacle on the way to work, their citizens - and fish - with undefinable national identities.

In this repeated stumbling against the paradoxical border, Saramago continually re-opens the question of whether his project of even makes sense. Five years later, Portugal joined the EEC. In 1995 it joined the Schengen area and the borders started to come down. Journey to Portugal's opening passages, in which Saramago ceremoniously re-enters the Portuguese nation at its north-eastern border, form an amusing memorial to something that should remain a memory.


"Nothing of the kind had occurred within the living memory of any border guard. This was the first traveller ever to pull up in his car, with the engine already in Portugal but the petrol tank still in Spain, and lean over the parapet at the precise point crossed by the invisible line of the frontier. Then, from across the deep dark waters, echoing between the tall rocky slopes on either side, the traveller’s voice could be heard preaching to the fish in the river.

‘Gather round, fishes, those of you to the right still in the River Douro and those of you to the left in the River Duero, come closer all of you and advise me which language you speak when you cross the watery frontiers beneath, and whether down there you also produce passports and visas as you enter and depart. Here am I, gazing down on you from this high barrier, as you gaze back up at me, fishes residing in these mingling waters, and who can as easily find yourselves on one shoreline as on another, a grand fraternity of fishes who only devour one another for reasons of hunger and never on a patriotic impulse. Grant me, O fishes, clear instruction, lest I forget this lesson on the second stage of my journey into Portugal: may I learn in passing from one land to the next to pay the closest attention to the similarities and differences, whilst not forgetting something in common to both humans and fishes alike, namely that a traveller has preferences and sympathies unconstrained by the obligations of universal love, never hitherto required of him. To you, then, I at length bid farewell, O fishes, until a future day: may you follow your own course out of the sight of fishermen. Swim joyfully on, and wish me a safe journey. Farewell, farewell.’

This was a fine miracle with which to start the journey.  A sudden breeze ruffled the waters, or perhaps it was simply the disturbance caused by the submerging fish, for no sooner had the traveller fallen silent than there was nothing to be seen apart from the river and its shores, and nothing to be heard above the dozy hum of the car engine."