I haven't reviewed anti-sexist art much but I was drawn to this one because it's identical in structure to the Charlie Hebdo cover featuring French finance minister Christine Taubira as a monkey which I reviewed a week or so ago.

Newsweek's discussion of sexism in Silicon Valley features the same large, central image which, left to its own devices, would be quite offensive. Then there's the text off to one side, attributing the noxious idea represented to Silicon Valley and suggesting that Newsweek might disapprove. And there's a relatively discreet symbol which viewers might or might not get, in the form of the black arrow/cursor indicating the agent of sexism, namely the IT establishment. And of course, the image is controversial for about the same reasons. 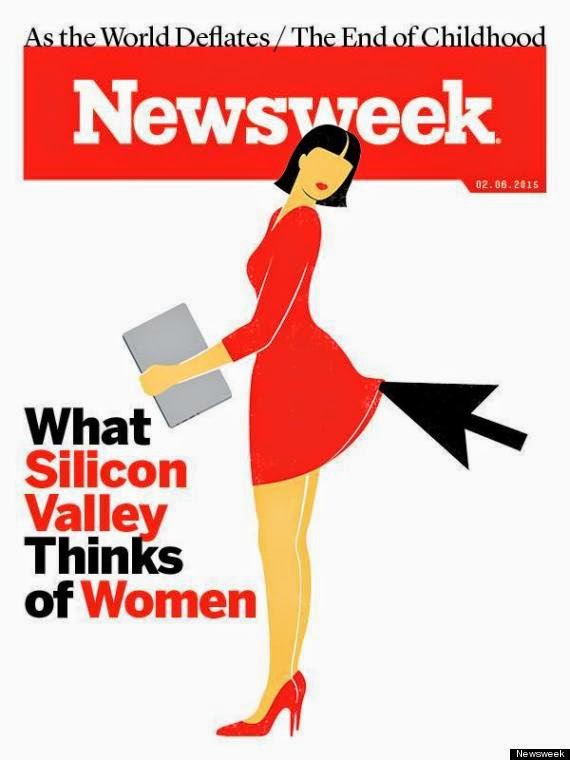 When I first discussed the Taubira cover, I provided a translation of the picture into words which was actually quite acceptable. I have to say that after spending more time thinking about the interpretation of images like this, I've changed the way I would translate them and I now feel obliged to apologize for posting this type of speech even in the context of a meta-discussion.

My translation of Newsweek's cover goes:


OOUUUAAHH! LOOK UP HER SKIRT!!
Or rather, look at Silicon Valley's approach to female staff..
Newsweek investigates!

My new translation of the Charlie Hebdo Taubira cover goes:

Can't you just see Taubira as a MONKEY?!!
The Front National sure can!
So much for their claims not to be racist, eh?

You can see what that cover looks like over here. Needless, to say, I think satire could do better than messages such as these.

BTW, I'm not a Charlie or a Newsweek reader particularly, I was alerted to the existence of the Newsweek cover by Butterflies and Wheels (here and here).
Posted by Anfenwick at 10:33