Cologne, then and now... 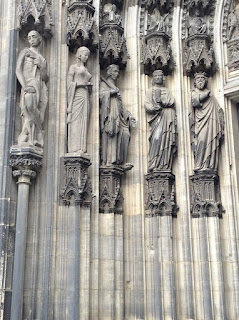 This is just a tiny detail from the amazing, but still blackened facade of Cologne Cathedral. I thought those two figures on the left were quite unusual for medieval sculpture. Slowly, it dawned on me that they're very different from their neighbors and must be modern.

When I told my father I was going to Cologne, he said he'd last been there in 1954 on a school trip, during which he'd stayed in a youth hostel in an old bomb shelter at the foot of Cologne Cathedral. It's not there now, but I went into a bookshop and browsed through a book of photographs of Cologne in 1945... It was nothing but a pile of rubble around the Cathedral which was still standing. In one picture I could see that the part of the Cathedral adjacent to this was blown out, but it was too fuzzy to show whether the original sculptures were broken then.

The consequence of the WWII bombing is that Cologne is quite a modern city, but very pleasant to be in, with a large pedestrian district and promenade along the Rhine.
Posted by Anfenwick at 16:00