Magical realism, and a year of battling over the boundaries of fantasy 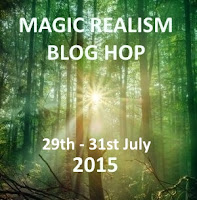 Last year a really cool thing called Worldcon happened almost outside my front door, so of course I went along, with my husband the hard core Science Fiction fan, and my daughter, the Japanese anime fan. It was fantastic, especially thanks to the focus it place on all kinds of diversity. SFF fandom tends to the Anglo, a word I’m using here (with some misgivings) to mean white AND native English speaking, but lots of people certainly wanted more demographic diversity, of writers, and if possible, of fellow fans.

Fast forward nearly a year and I’m embarked on a long, slow trip to the next Worldcon to be held in Spokane, Washington. It may turn out to be the last for a while. Worldcon, or at least the Hugo award it hands out each year, has gone to the dogs (a link for anyone who doesn’t get the dog reference).
The leader of the Rabid Puppies, the most successful canine faction, makes no bones about the strength of his preference for Anglo culture, especially the most conservative, xenophobic branches of it. The less successful Sad Puppies whine at suggestions that they might be trying to exclude anyone. They just want good, old-fashioned, unpretentious genre fantasy and science-fiction, and they don’t care who writes it.

The trouble is that demographic diversity of writers isn’t very likely to come unaccompanied by literary diversity. The fantastic, magical, supernatural and numinous are related forms of something which finds expression everywhere in culturally differentiated ways. Anglo genre fantasy is just a small subset of this spectrum. Presumed truth values, perceived literary value, types of motifs and interactions with the real world vary, as does literary form (more or less closely related to oral forms), and the status and role of writer and reader.

Consider next year's proposed Mistress of Hounds Kate Paulk’s emphasis on immersion in her analysis of what makes a book Hugo-worthy. It’s an esoteric thing, this ‘immersion’, a culturally specific practice of altering states of consciousness through words. It’s not clear that it’s either desired, or even easily accessible, outside the cultures in which it is practiced. Consider science-fiction as a genre: when it’s not fantasy with technology instead of magic, isn’t it a variation on prophecy? Is 'World'-con to be reserved for Anglo-specific cultural forms?

One of the points non-Anglo writers brought up again and again at Loncon 3 was that the core expectations of western fiction, expectations as ‘basic’ as plot form, conflict, focus on individual characters, ‘showing-not-telling’ don’t mesh well with their cultural priorities. Even those close neighbors of the Anglo cultural zone, the North Europeans of Scandinavia and Germany seem to favor far more exposition than is usually recommended in the Anglo literature. The French tend towards poetics and philosophy, and the 'tale', fairy or otherwise, is an important form with them.

Consequently, to say you want more diversity in the fantasy genre can mean one of two things: either you hope to convert people of other cultures to the minutiae of your own, or you intend to tear down the walls between genres and create a mixed reading space, open to numerous traditions of the fantastic.

Magical realism is one alternative form of the fantastic, the one I write, though hardly the only one. My own reading list also includes books with links to the tradition of animal fables like Alain Mabanckou’s Memoirs of the Porcupine (after all we have werewolves and witchcraft - why not porcupines and witchcraft?); mythopoeics (is that a word?) like Kazuo Ishiguro’s Buried Giant (not a million miles in spirit from Alan Garner); or works based in religion and spirituality: Chitra Banerjee Divakaruni’s Palace of Illusions reads an awful lot like the Katherine Anddison’s Goblin Emperor, and as the Puppies seem particularly keen to bring Christianity to our reading lists, why not also Hinduism? I read and enjoy books like these for the same reasons I read and enjoy fantasy. My own reading has been effortlessly demographically diverse, largely because I trawl through the literary shelves of the bookshops at the same time as the fantasy ones.

What I write is definitely magical realism, the combination or magical elements with a real world setting. It also has that feature associated with several core magical realist works: it makes sense as post-colonial literature - or are we post-globalized by now? - at any rate, it is about identity, especially cultural, and the way it emerges from the building blocks of history and politics, daily life and relationships. Where it nods towards the traditions of Anglo fantasy and science-fiction - dragons and UFOs for example - it’s because of the cultural identity of the protagonist, and she has many strings to her bow, as people do: the classical culture of the elites, the popular culture of her ancestors, fairy tales for her daughter, essays for academia…  It even uses language in a way that expresses these variations, and others regarding her state of consciousness, rather than aiming at the hypnotic immersion of the reader.

I know, of course, that this kind of writing isn’t everyone’s cup of tea (what is?) but with Loncon’s panel talks systematically turning away an overflow of people who wanted to talk about the kinds of issues I also found relevant and interesting, I came away feeling positive about throwing in my lot with a broad SFF community. I felt I could fit in, both as a reader and a writer, and my family circumstances favored my ongoing participation (a particularly important detail for many women and members of non-Anglo cultures).

A few months later, when Kazuo Ishiguro and Ursula Le Guin had their little discussion about whether Ishiguro’s latest book, Buried Giant, counted as fantasy or not, I understood both sides. Of course, the literary shelves are filled with books like Ishiguro’s and many of them are by non-Anglo authors. And perhaps the only reason Le Guin thought Ishiguro’s book should be fantasy is that a book can’t get much more Anglo in appearance than by mythologizing the Dark Ages of Britain, regardless of the fact that the author is a Briton of Japanese origin?

Authors seem to benefit financially from literary status and it also allows them to be taken seriously across a broad range of cultural groups, especially within their own (another issue raised by some non-Anglo writers at Loncon 3). On top of that, translation of foreign works into English currently follows a principle of parsimony - a book must seem ‘necessary’ in order to qualify for translation, with the result that being literary is almost a pre-condition for being translated. This severely limits the available writer demographic for genre literature - though it favors translation of other fantastic forms, such as magical realism.

All the same, I understood Le Guin’s frustration. The presence of authors whose value is recognized by a larger world raises the status - and the interest level - of the SFF genre. The idea that a ‘good’ author can’t be writing fantasy must quite justifiably seem like an affront to her, and looks like sheer snobbery on the part of those who do such categorizing.

Just about a month after that, I wondered if Le Guin felt embarrassed after the Puppies made it so very clear that they wanted to aggressively exclude from SFF the very type of writer she’d been castigating for keeping a distance. Even as a part member of the Anglo cultural group, it felt quite disturbing, to have the kind of literature I like to read and write made the target of such an explicit assault. I’m not optimistic about its effect on non-Anglo writers and the fans who certainly seem to want them.